Americans are leaving the costliest metro areas for more affordable parts of the country at a faster rate than they are being replaced, according to an analysis of census data, reflecting the impact of housing costs on domestic migration patterns.

Those mostly likely to move from expensive to inexpensive metro areas were at the lower end of the income scale, under the age of 40 and without a bachelor’s degree, the analysis by home-tracker Trulia found.

Looking at census migration patterns across the U.S. from 2010 to 2014, Trulia analyzed movement between the 10 most expensive metro areas—including all of coastal California, New York City and Miami—and the next 90 priciest metro areas, based on the percentage of income needed to pay a monthly mortgage on a typical home.

The net population flows skewed away from the most expensive markets, though the trend became less pronounced for those higher up the income scale. For example, there was a net flow of more than 27,000 people making less than $30,000 from high-cost markets to more affordable markets throughout those five years, but for those making more than $100,000, the net loss declined to 2,438 people.

“All theories suggest that when a market becomes increasingly unaffordable, those that bear the burden are those on the lower end of the income distribution,” he said.

The data look exclusively at movement among people within the U.S., not international migrants. Other recent research has shown a similar trend of migration from expensive markets to inexpensive ones. 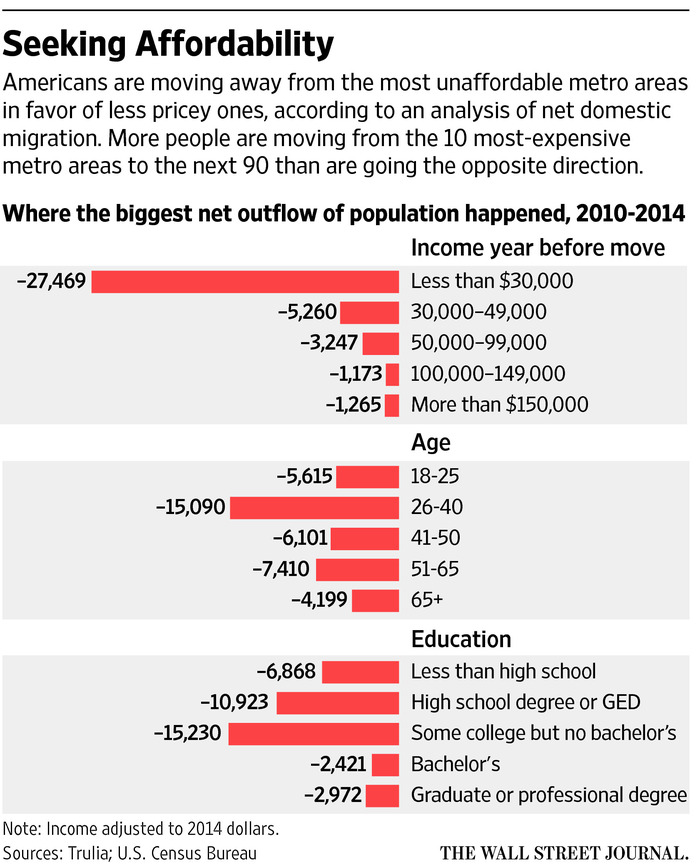 An April report from Trulia researcher Mark Uh found that lower-income households represent a larger share of those moving away from the most expensive markets than their overall population in those markets. For example, those earning less than $60,000 a year make up 27.4% of all households in the San Jose metro area, but they represent nearly half of all households moving away.

Another study this year from California policy group Next 10 and Beacon Economics found that New York state and California had the largest net losses of domestic migrants between 2007 and 2014, and that lower- and middle-income people were more likely to leave.

Not everyone is pushed out, though. Some simply find opportunity in more affordable markets.

Karim Jinnah grew up in San Jose and after college worked for a Southern California software company that catered to the home rental industry. A Dallas firm bought his company in 2010, and he was later offered a promotion for a position in Texas.

He liked the offer, and he always wanted to invest in real estate for additional income. So he ran the numbers and realized how much easier that would be in Texas.

“In California the cost of housing is so high. The numbers didn’t make sense, in terms of acquiring property and renting it out,” he said. “I couldn’t really do that in Los Angeles, but I could do that in Dallas.”

Within a year of moving, he was able to save enough money to purchase a new home while still renting out his house in Oxnard, Calif. He now owns three homes in the Dallas area.

Write to Chris Kirkham at chris.kirkham@wsj.com