Radnor Township School District encompasses 14 square miles in Radnor Township. The district includes three elementary schools, one middle school, and one high school . The Radnor school district, like both the Tredyffrin and Lower Merion school districts, has been recognized as one of the best in the nation, and includes numerous athletic fields, educational spaces, parks, and playgrounds.

The Radnor Township School District (RTSD) has 3,605 students enrolled, with the student body being made up of 75.78% white, 15.06% Asian, 4.58% African American, 3.91% Hispanic, and .67% multiracial ethnicities. The district consists of five different schools, including:

Ithan Elementary School (IES) – Currently serves 434 students, and received a Pennsylvania School Performance Profile Score of 98.3 out of 100 for the 2013-2014 school year.

Radnor Elementary School (RES) – RES currently has 585 students, and scored 94.6 out of 100 for the 2013-2014 school year on the Pennsylvania School Performance Profile Score.

Wayne Elementary School (WES) – WES has 577 students, and received 85.3 out of 100 for the Pennsylvania School Performance Profile Score.

Radnor Middle School (RMS) – There are currently 890 students attending RMS, and the school earned 96.1 out of 100 on the Pennsylvania School Performance Profile Score.

Radnor High School (RHS) – RHS has 1,166 students and received a Performance Profile Score of 98 out of 100. Additionally, the school received a Gold ranking on the US News Best High Schools list for 2015.

The Radnor Township School District has 321 teachers, and has the distinction of being listed as the Pennsylvania Department of Education’s highest scoring school system in academic performance. Students attending Radnor Middle and High Schools can enter the STEM-based Project Lead the Way program that features multidisciplinary hands-on enrichment courses in engineering, math, science, and technology for students wishing to enter these fields.

The district also offers Gifted Individual Education Plans for students who test with IQs in the range of 130 or above. These plans include extensions in curriculum, acceleration of individual courses, and/or replacement work based on the individual student’s needs.

Wayne 427 is a brand new boutique residential condominium. The striking design and meticulous craftsmanship create a modern, industrial presence in a well-established nei...

Just listed in Conestoga Village! Don't miss out on this 4 bed, 2 bath home in Radnor Township School District! Upgrades abound in this home, including a single story add...

Spectacular, spacious residence with 10' ceilings and and breathtakingly updated living spaces in RADNOR TOWNSHIP! Look no further and move right into this majestically...

© 2022 TReND. All Rights Reserved.
The data relating to real estate for sale on this website appears in part through the TReND Internet Data Exchange (IDX) program, a voluntary cooperative exchange of property listing data between licensed real estate brokerage firms in which Real Estate Company participates, and is provided by TReND through a licensing agreement. Real estate listings held by brokerage firms other than Real Estate Company are marked with the IDX icon and detailed information about each listing includes the name of the listing broker.
All information provided is deemed reliable but is not guaranteed. Some properties which appear for sale on this website may no longer be available because they are under contract, have sold or are no longer being offered for sale. The information being provided is for consumers’ personal, non-commercial use and may not be used for any purpose other than to identify prospective properties consumers may be interested in purchasing.

Search the Main Line by Map 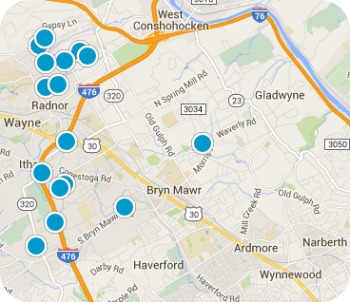